I recently noticed that a viral campaign called “It’s Colombia, Not Columbia”, started by a digital social media firm Zemoga and its Vice-President Carlos Pardo,  has taken the Colombian community on Facebook and Twitter by storm.  The campaign received a nod over at the Huffington Post, recognition by CNN,  has been endorsed by ultra-famous Colombian investigative Journalist Guillermo Prieto better known as “Pirry”, and has already come out with it’s own line of T-shirts.

It’s a positive development not only that our non-Colombian friends will be aware of the spelling mistake which irks all Colombians everywhere, but that young, dynamic, and social media savvy Colombians are trying to reject the negative and ignorant stereotypes that have far too-long defined the country internationally.

Much of what the campaign is espousing is true – both in terms of security and poverty reduction, Colombia has made huge gains in the last 20 or so years. The heart of the campaign has an extremely noble intention – showing the “good” side of Colombia, so that we can be known for our wonderful singers, artists, writers, and people trying to build peace instead of our drug traffickers and warlords. And (painfully) slowly, Colombia is indeed overcoming it’s negative legacy. The Colombia in the late 1990s and early 2000s had over half of its people in poverty (or at least how the government measures it), that number has gone down to a third today. In 2002, the World Health Organization (WHO) considered Colombia the world’s most violent country and it was spoke of in diplomatic circles as a “failed state” in the same breath as Somalia and the DRC are today. 2012, by contrast, saw one of the lowest murder rates in almost 30 years.  Also worth nothing, as Pardo himself mentions, Medellín, the 2nd largest city, went from being the murder capital of the world in 1993  to last year being voted one of the most “innovative” cities in the world.

The campaign is humble, and sensitive to the fact that far too many of us, and our family members, have very fresh wounds from the peaks of violence in the late 1990s and early 2000s. Pardo says that he does not want to “deny Colombia’s reality or its past but we do want to concentrate on the good things.”

Problemas – Who gets to represent Colombia? Who is responsible for the “recovery”?

However, Colombia, although a beautiful country with a resilient people and many, indeed “positive” things worth highlighting, is still a racist, violent, and extremely unequal society. Therefore, the need to be critical is manifest: What are the “positive” things that are being mentioned? What images and whose bodies are excluded? Not surprisingly,a long scroll through the campaign will only show the usual images of a “modernized” and “advanced” Colombia of mostly White and light-skinned Mestizo bodies, who are seemingly a part of the global and cosmopolitan urban middle-class, smart phones and all.

Colombia’s actual population, in contrast to what many within the country would like to project, is a bit more diverse. According to some estimates by the UNDP, Colombia is up to a 1/3 rural, and according to Afro-Colombian organizations such as El Proceso de Comunidades Negras (PCN), up to 20% Afro-descendant. Colombia also has a small yet not insignificant indigenous population, which is 3-5% of the population, and a population of Arab descent in the Caribbean coast, to say nothing of other ethnic and social groups that are not a part of dominant national myths; the 35% of Colombians who live in poverty, the estimated 4.6 million who live in extreme poverty (under $2/day). Where is the place of that Colombia, Colombia in its whole, the good, the bad, and the ugly, in that campaign? Is a Colombia where we show only “positive” things also a Colombia without ethnic minorities, rural people, people living in poverty?

Furthermore, this campaign is nothing new. Pardo recognizes the history of previous social media campaigns trying to restore the republic’s damaged reputation, such as One Million Voices Against The FARC (Un millón de voces contra las FARC) (OMVAF).

A bit of history on the movement:  In 2008, Barranquillero Engineering student Oscar Morales started the OMVAF campaign – a Facebook movement that organized protests against the Marxist insurgency who has been at war with the government since 1964, the Revolutionary Armed Forces of Colombia – The People’s Army (FARC-EP), asking or an ending to kidnappings. Morales’ campaign was insanely successful with literally millions of Colombians of all walks of life out in the streets (protests in Colombia, aside from victim’s movements, are largely frowned upon by the upper and middle-classes). Morales, as documented by David Kirkpatrick’s must-read about Facebook, “The Facebook Effect”, became a key part of Mark Zuckerburg’s narrative of how Facebook’s openness can bring peace and social change to the world. What Pardo and Zuckerburg neglect, however, is that a campaign against one warlord is not a campaign for peace. OMVAF fight quite nicely into the ‘War on/of Terror’ dissident demonization discourse of former President Alvaro Uribe Vélez’s American-supported counterinsurgency campaign, in which any possible negotiation with the guerrillas was shut down in favour of a military solution to the conflict. OMVAF was also extremely useful for the state as it was silent on the crimes of the Colombian Army and the right-wing paramilitaries who have been often associated with the state’s pursuit of the guerrillas. 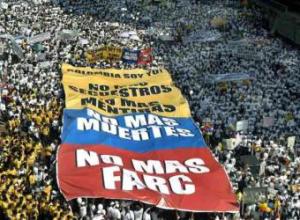 In a similar vein, “It’s Colombia, Not Columbia” could be interpreted as basically free publicity for the Colombian government’s agenda. Within Colombia, it’s common knowledge that the government has hired a professional PR firm to create a Colombia “brand” in order to market the country as a viable option for tourism and investment, and trying to move out of the shadow of the FARC and Pablo Escobar.

“There are some people who’d say that Colombia may not be the paradise that the campaign paints it out to be. For example, despite the current peace talks, violence still exists by the FARC and ELN rebel groups and Colombia remains the largest supplier of cocaine in the world. So what exactly are the changes that you want the world to see in Colombia?
We want people to understand that Colombia is much more than what they see in the media. We want to balance out the message and tell the positive side. Today Colombia has a solid economy and investors are looking towards Latin America, especially Colombia because during the current global financial crisis Colombia has shown sustainable growth rates. I think Zemoga is an example of these changes, people think Colombia is a coffee exporter and it is but it also exports digital services to clients like Toyota, Nissan, BMW, Sea World.”

Again, Pardo is not necessarily wrong – Colombia can confidently claim to have one of the strongest economies in Latin America, if not the world, in this current Great Recession. What Pardo fails to mention is that, in line with the current President Juan Manuel Santos’ development plan for Colombia, natural resource extraction, not the knowledge and digital economy,  will be the engine of economic growth. With economic liberalization through Free Trade Agreements, and the (largely violent) ‘re-establishment’ of the state in formerly ‘marginal’ and guerilla-controlled,yet resource-rich, rural areas  thanks to the counterinsurgency, Colombia is for the last decade has become “open for business”. Indeed, during former President Uribe’s two terms, foreign direct investment in Colombia tripled.

My other wonderful country, Canada, has already begun investing heavily in Colombia’s mining sector, and a Canadian bank has now taken control over one of Colombia’s most important financial institutions. Allegations of connections between the mining industry, and large agro-business and neo-paramilitary groups are countless. I also have to mention how Drummond, an American multinational, has recently been responsible for a huge fossil fuel spill off of the Caribbean coast, and the workers of Cerrejon mine, the largest open-pit coal mine in the world which is located in one of Colombia’s ‘most indigenous’ and 2nd poorest state, La Guajira, have gone on strike asking for better pay. On the other hand, poverty has been reduced by 15% in a decade, although the GINI coefficient, measuring inequality for Colombia, has barely budged from a high of o.57 to a current level of 0.55, making Colombia the most unequal country in Latin America after Haiti and Bolivia, and one of the most unequal in the world.

To say the least, the foreign direct investment which this seemingly urban-produced branding campaign invites, is not without controversy. Arguably, it is taking the most, and giving the least, to those who are invisible and have been historically invisibilized in Colombian society – Indigenous people, poor people, Afro-Colombians, displaced people, and people living in the countryside or in “peripheral” regions.

In conclusion, as peace with the FARC approaches, Colombians must indeed re-conceptualize what “Colombia” is (and how its want to be perceived) so that we can move past (but never forget) the nation’s hyper-violent legacy. Will we create a new social deal, recognize the crimes of the powerful, and try and move towards a new, more diverse, and inclusive Colombia which does not reproduce the systems of inequality that fed the violence in the first place? Or will we continue to sustain the same narratives and power structures in which some are heard, many are silenced, and the country’s riches are sold off to the highest bidder with little consent from the communities who live on them, but where we criticize foreigners when they dare point out our shortcomings, and even worse, misspell “Colombia”?